Our shipment of bulbs has arrived and is ready for sale! Plant now, enjoy in the spring!

A full list of what’s available is below, and will be updated nightly. We’re currently open for browsing Mon – Tues – Fri – Sat from 9am-5pm (or by appointment), and are accepting email orders for curbside pickup – grangehollow@gmail.com (subject to availability).

We also have Fall Mums!

We’ve been greeted with roller coaster weather this May, from rainy and chilly to humid and sweltering. After 2014 seemed to skip summer all together, we’re clinging to the hope of some honest heat to get our veggie gardens roaring for July and August, and it’s looking promising so far!

Down to *only* 51 varieties of tomato plants this year, we’re growing most of our old favorites and have added several promising new varieties to our tomato lineup. We’ve included a few hybrid types whose parent plants are old heirloom favorites, such as “Big Brandy”, the offspring of the standby Brandywine and yummy New Big Dwarf. Keen to get the eating underway, we’re looking to Anna Russian with great anticipation – she’s a popular and hefty oxheart with a reputation for early ripening.

Odd shaped edibles are always a favorite, and the Bulgarian Carrot fits the bill – it’s a pepper that looks how it sounds but packs a little more heat than a jalapeno so watch out! Also new for peppers is Fatalii, with an ominous name it ranks near the top of the heat scale and is a gateway pepper for anyone looking to work their way up to the deadly Ghost.

Thanks to a Square reader we’re happy to announce we’re now able to accept Visa and MasterCard at our nursery (but not yet at market – we’re still smartphone challenged!). We’ve also made a few changes to the layout of our website. Though especially noticeable to our mobile visitors, everyone can enjoy the increase in the colour purple!

Stop by the nursery or find us at the Keady and Owen Sound markets for a great selection of locally grown plants for your vegetable or herb garden!

Happy planting, and have a great growing season! 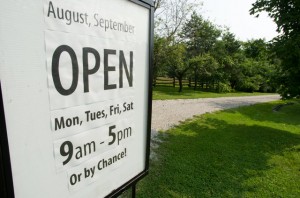 Despite our protests, August is upon us as scheduled and summer is rolling on by. For the remainder of the season, our hours will be:

On Wednesdays, Thursdays, and Sundays, we’re open by chance or by appointment. To avoid possible disappointment on these ‘chance’ days, please call in advance of your visit (519-794-3444), but feel free to drop by if you’re in the area enjoying a country drive. Until the plants learn to water themselves, we’re often around!

In the spirit of the Canadian summer, there is construction work underway on the nearby Sideroad 5 and it will be out of commission between Concession 6 and Concession 4 for an indeterminate amount of time.

This may affect your route to Grange Hollow if you’re coming by way of Highway 6. Please take McCullough Lake Road east (just south of Williamsford) Highway 6, turn right at the “T”, then left at the next stop sign, then the next right and you’ll pass right by us. It’s a short detour through some nice country.

We’ve had a few early and eager customers trickling in over the past week, and May is finally here so it’s time to declare that we’re open for the season!


With the long, chilly, snow-filled, seemingly never-ending, and also cold, winter behind us, we’re all looking forward to the new growing season. The hours Sarah and Kathy spent in the winter months poring over seed catalogues to ensure a great selection of quality veggie transplants pays off come harvest time. It’s exciting watching these seeds germinate and wake up to the world in as the days get longer and just a little bit warmer.


We shepherd these little seedlings until they reach your garden (or ours), all the while waiting in eager anticipation of the varieties new to us (like the pair of “Bumblebee” cherry tomatoes) or the return of our old stalwarts (oh, Sun Sugar, it’s been too long!). Our backs still feel sore from shoveling snow, but we can almost taste the fresh, juicy tomatoes straight from the garden!

We’re kicking off the new season at the 2014 Township of Chatsworth Business Showcase. We’ll be bringing a few of the early rising perennials, some of the more cold tolerant annuals, as well as some tomatoes and other veggies for those who want a head start. It’s our first year at this show, and we hope to see you out!

Here’s to a great growing season, guaranteed to be different from the last!

Editor’s Note- this was originally written in the Fall of 2012. As it only lived on our Facebook page, and I’ve just finished canning my first batch of 2013 (the first snap lid of the year just ‘snapped!’) this seemed like a good time to move it to our more permanent website.


Nachos, pizza, sandwiches, eggs, burgers, chocolate cake, everything tastes better with Pickled Jalapenos on it (ok, maybe not cake). Once upon a time, back when I had more cents than sense, I used to fuel my Jalapeno obsession with the store bought version. I plodded along blissfully unaware of the home-crafted alternative. We’ve grown our own Jalapenos for years, but always to be consumed fresh during the summer with a handful being accidentally dried after being pushed to the back of the shelf behind the spice rack.


That is, until the Never Ending Fall of 2011 followed by the Winter of 2011/12 That Never Came. With this late warm weather came an abundance of fresh Jalapenos from our garden, far more than we had any chance of eating fresh without causing severe gastrointestinal distress.

By this point I had been living in the country long enough to know that people do in fact pickle things at home, yet I had never been brave enough or motivated enough to try it myself. With the goal of preserving our bounty for the coming year, I entered the brave new world of home pickling.

Never again will I settle for that store bought stuff. With peppers straight from our garden into the canner, it’s like fresh hotness happened in a jar.

END_OF_DOCUMENT_TOKEN_TO_BE_REPLACED

Got shade? Appreciate native plants? Enjoy a bizarre propagation partnership between plant ‘n’ ant? Want another excuse to go check on your garden every day in the spring? Like a plant that can switch from a gory or even disgusting common name to a patriotic scientific name?

END_OF_DOCUMENT_TOKEN_TO_BE_REPLACED

It felt like a cool start to the year, with an endless wait for spring to arrive. Spring came and went over the course of a few days and summer quickly took over with the terrific heat and sun that gives us the itch to get started on our gardens. Some of our patio tomato plants are starting to blossom, we can almost taste the fresh bruschetta, salsa, sauces, and ratatouille!

Every year brings new plant varieties to our line up and we’re eagerly anticipating the new flavours, textures, and colours this year’s vegetable garden will produce. Okra, romanesco cauliflower, and a hot pepper called ‘Fish’ with variegated foliage are a few of the new veggie highlights, along with several interesting new heirloom tomato varieties, even a blue one!

You’re looking at a new addition to our operation- this website is brand new for 2013! We’re continually adding more information about the plants we sell, and keep an eye out for some articles on featured plants as the year goes on.

Our greenhouses are bursting with veggie starters that are raring to go to market and find their way into your garden. Like most gardeners, the plants are our masters and we will fulfill their market dreams by taking as many of them as we can fit in our truck to the Owen Sound Farmers Market every Saturday and the Keady Farmers Market every Tuesday for the rest of the year. Visitors are welcome at the nursery 7 days a week where you can browse our full selection or take a turn through our gardens.